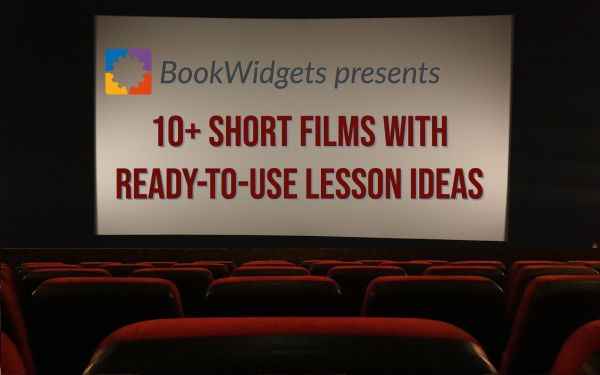 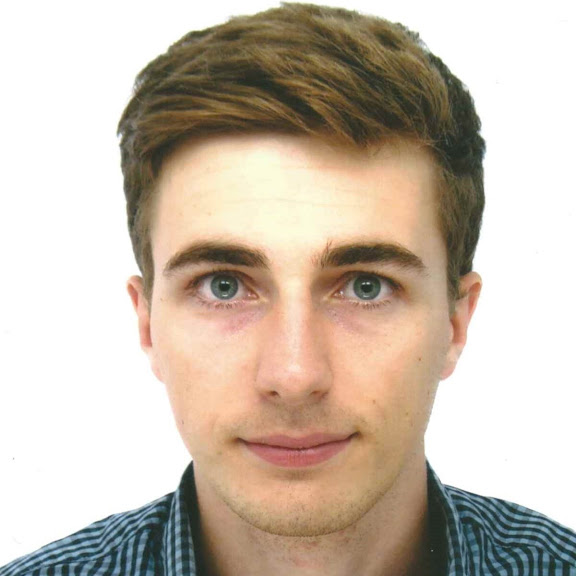 Who doesn’t like short films? They’re often innovative, funny, or surprising, and always to the point. There are hundreds of great short films available online for free, about almost any topic you can imagine. Whereas it’s not always easy to show feature films in the classroom (because of your limited amount of time), a short film can perfectly be watched and discussed in one lesson sequence.

Since most short films have an engaging element, they can be used in several ways in your lessons:

In short (pun intended), there’s no reason not to use a short film in your lessons from time to time.

In this blog post, I’ve selected 10+ great short films for students about totally different topics and created ready-to-use lesson examples for each one of them. Most of these short films don’t have spoken dialogues, so they can be used in any language (and we’ve already translated most of them in English, French, German, Spanish and Dutch). All the digital exercises are created with BookWidgets. You can create a free BookWidgets account (if you don’t have one already) and copy the widgets to your account, which will allow you to make some changes where necessary. We’ll explain how this works at the end of this blog post.

But first - drumroll please 🥁 -, BookWidgets proudly presents the 12 selected short films. Click on the name of the film to get the synopsis and the ready-to-use lesson ideas.

🍿 Synopsis: Childhood dreams and the brevity of life may sound like heavy topics, but they are presented in a very approachable manner in Coin Operated. The story starts with a boy who has the dream to travel in space. He overcomes a first disappointment when a rocket kiddie ride doesn’t help him to reach his goal. He then decides to start selling lemonade to make enough money to get into space one day. Will he eventually get there? Watch the short film to find out.

In Happiness, the spectator gets a much darker image of the quest for happiness and fulfillment. This engaging animated short film shows the rat race we’re all living and leaves no one unmoved.

👩‍🏫 Lesson idea: There are quite a few interesting YouTube comments about both Coin Operated and Happiness, so it seems like a nice idea to ask your students to read some of the comments and discuss them, before writing their own comments. 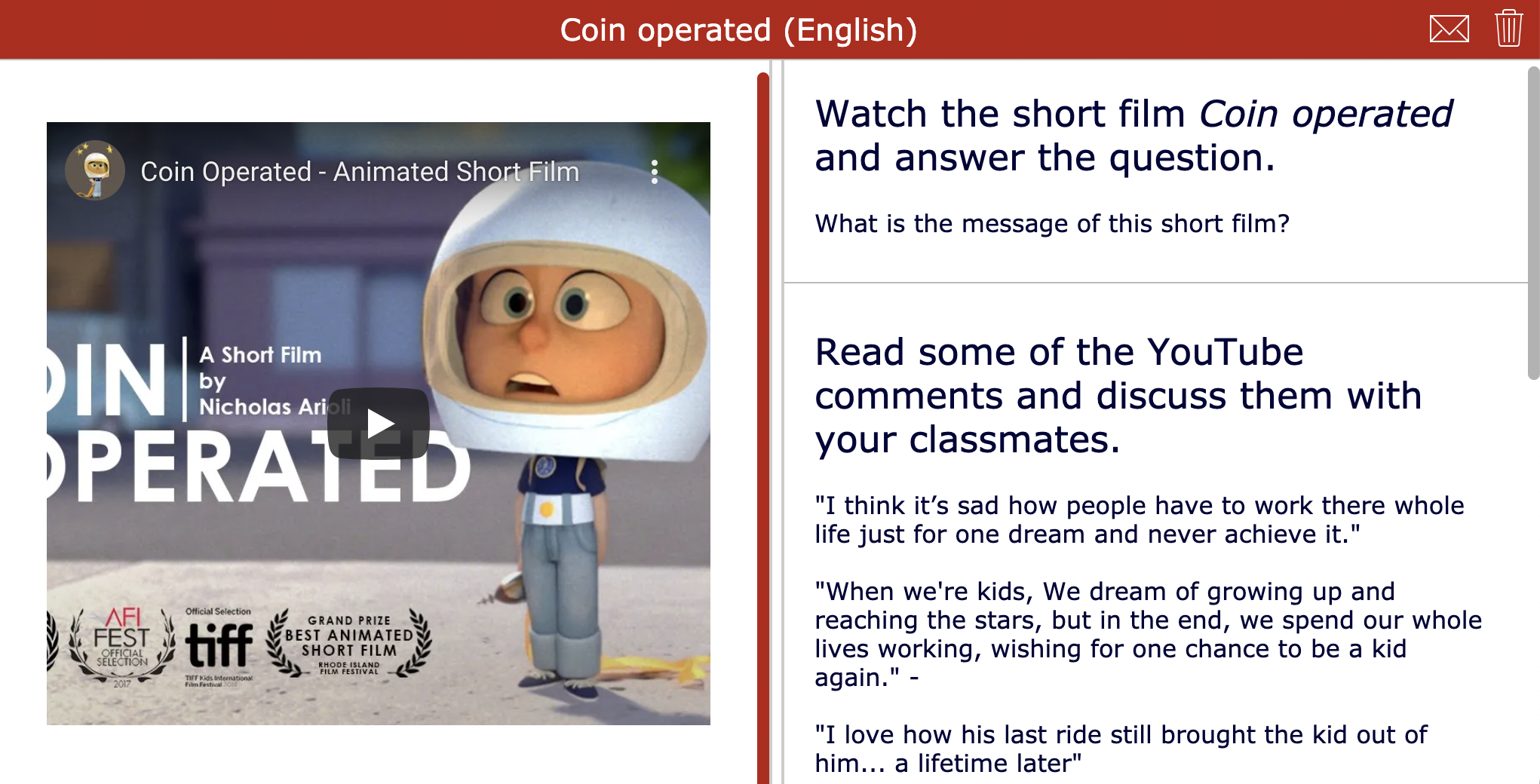 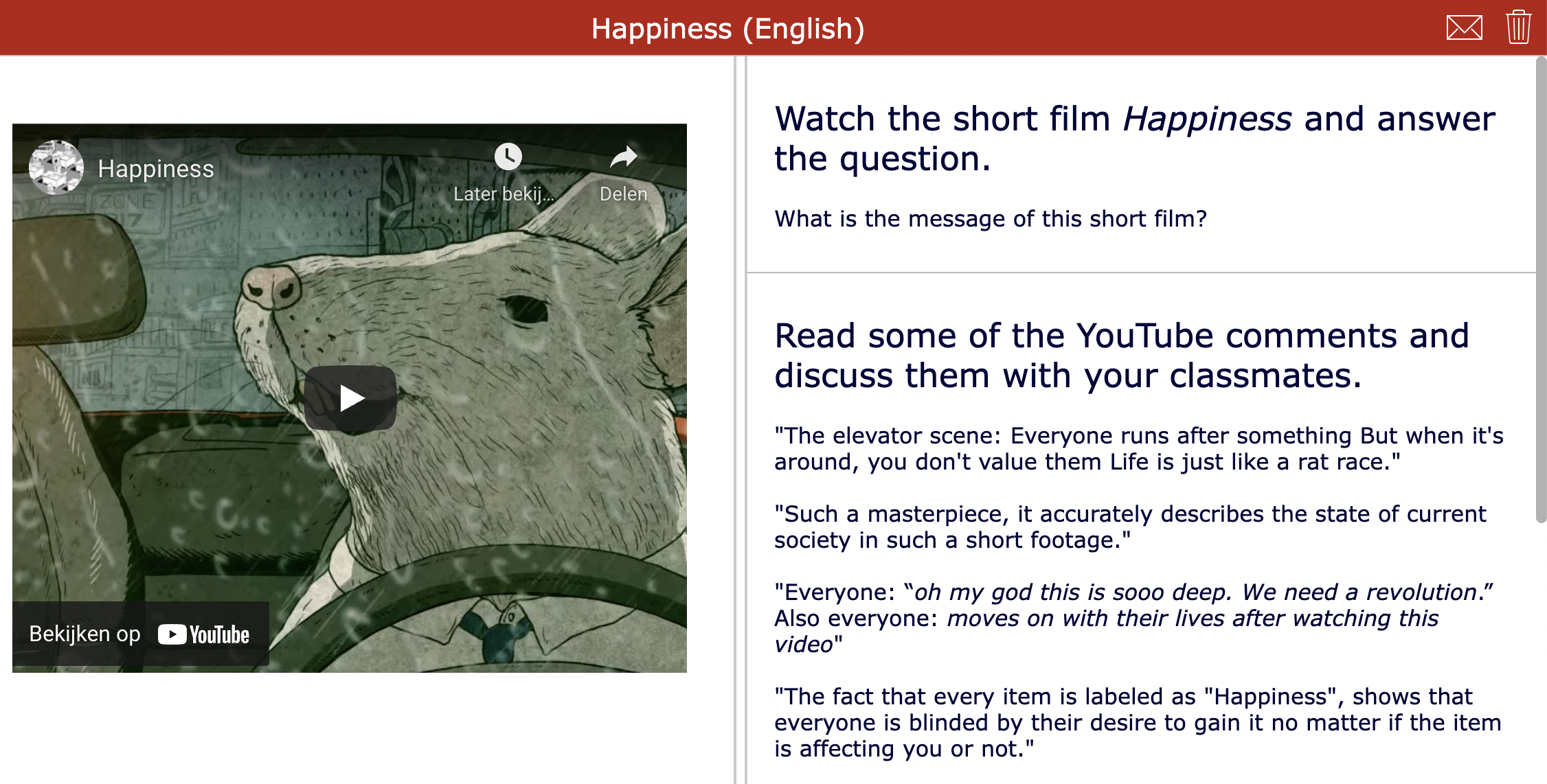 🍿 Synopsis: An old Dutch proverb says “A good neighbor is better than a distant friend”. Flatlife shows the life of 4 neighbors who live in the same skyscraper. The split-screen view allows you to simultaneously follow the 4 characters, who don’t seem to realize the influence they have on each other’s lives.

👩‍🏫 Lesson idea: This short film is great when you’re teaching a foreign language and your students are working on themes like the parts of the house, housing environment, and habits. The split view works great for a group work: make 4 groups and ask each group to concentrate on one of the four characters, so they can present them to their classmates. 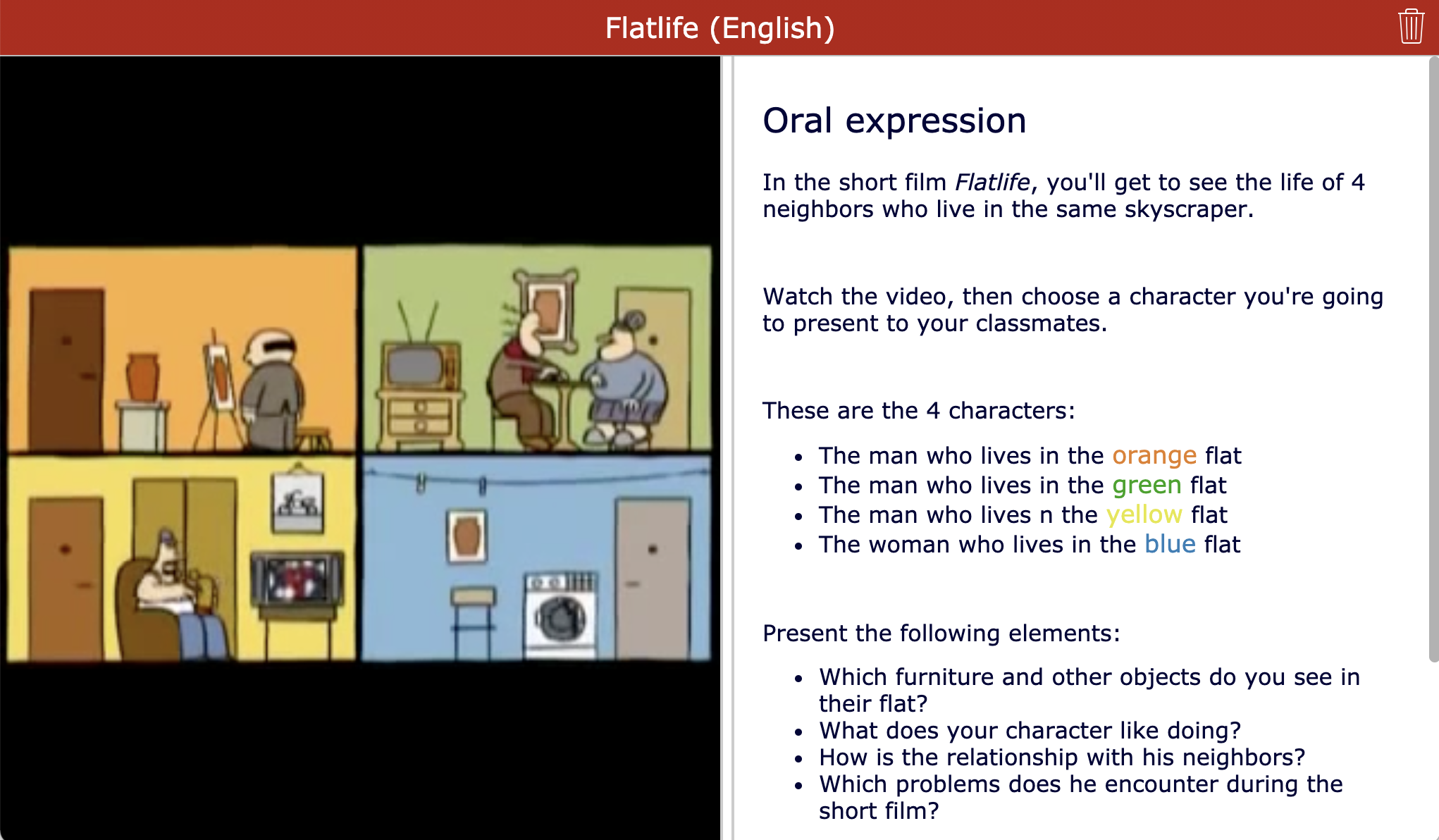 🍿 Synopsis: In Mind Games, a boy is taking an exam, but his brain decides to escape and play outside. The exam should be no problem, as the brain fills the boy’s head with books. He answers question by question, but then bumps into a final question which he can’t answer without his brain: “What is the meaning of life?”.

👩‍🏫 Lesson idea: Mind Games could be used as a tool to let your students reflect on the way they study for an exam. You could also use it as a lesson starter to discuss the role of schools (it could be an introduction to the spoken words film What is school for?, presented in this previous blog post). But the most creative way of using Mind games would be to ask your students the final question of the exam and give them the freedom to answer by text or by drawing.

🍿 Synopsis: If you like plot twists, you’ll love Snack Attack. An old lady sits on a bench in the train station, when suddenly the boy sitting next to her starts eating her cookies. As a spectator, you’ll quickly think the boy is extremely rude and has no respect for elderly people, but things turn out a bit differently…

👩‍🏫 Lesson idea: This short film is a great resource to introduce the danger of stereotypes and judging people too quickly. You could start your lesson with pictures of an old lady and a young punk-style boy and ask your students to tell the first things that come to their minds when seeing these pictures. Write them down on the blackboard before watching Snack Attack. It is a good idea to pause the short film a couple of times and ask your students what they think will happen, like in the digital exercise you can find below. 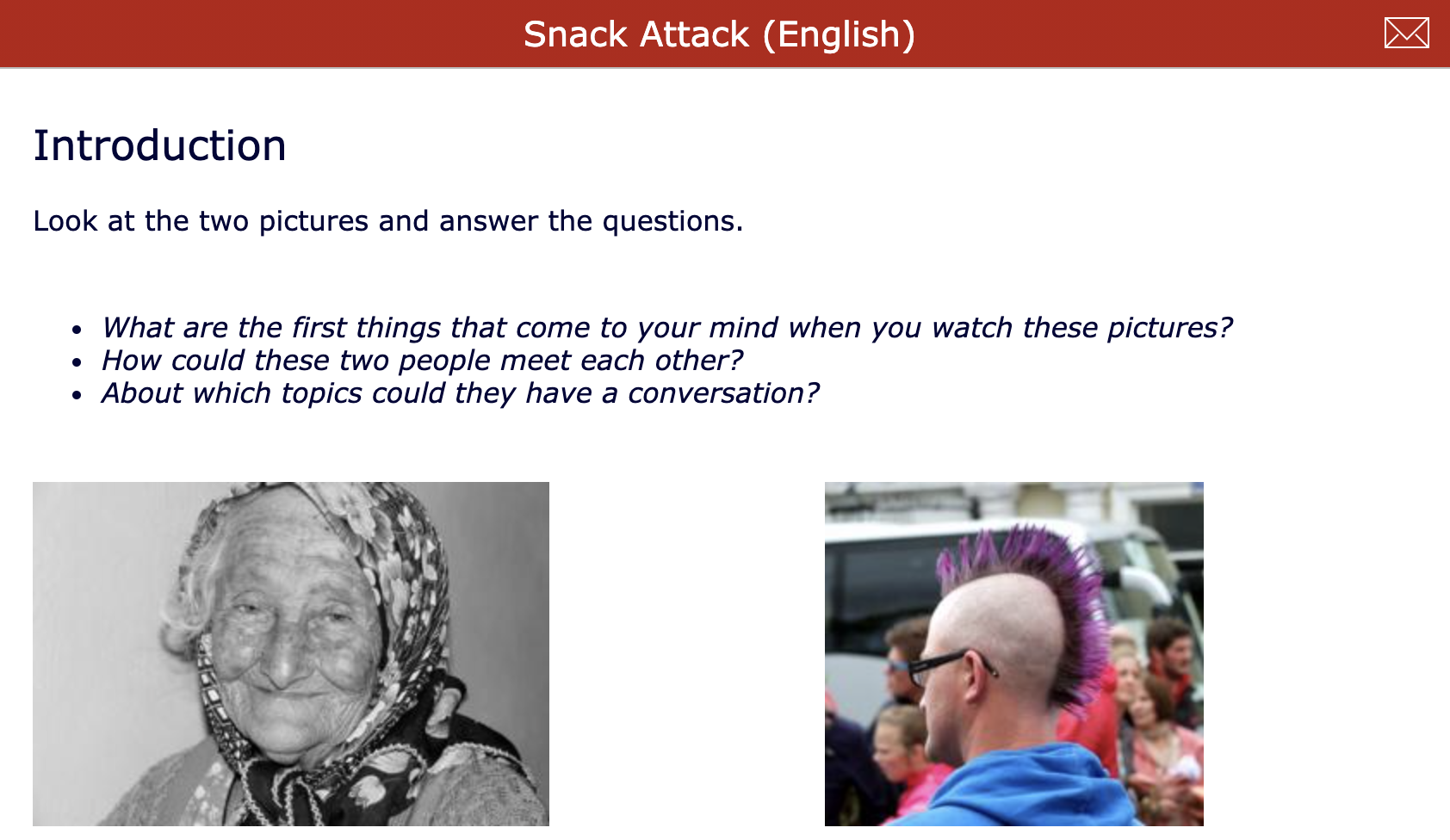 🍿 Synopsis: These three different short films are all about the impact of social media on young people’s lives. We see how they share beautiful or impressive pictures with their friends, but in reality, a lot of these things are made up. The three short films are great instruments to let your students reflect on the impact of social media on their daily lives.

👩‍🏫 Lesson idea: Since the three short films discuss the same subject and have a lot of similarities, it could be interesting to ask your students to analyze and compare them. Besides, they are a great way of starting a group discussion about a topic that concerns them all. To end this topic in a creative way, you could ask them to make their own “Instagram versus reality” picture or movie. 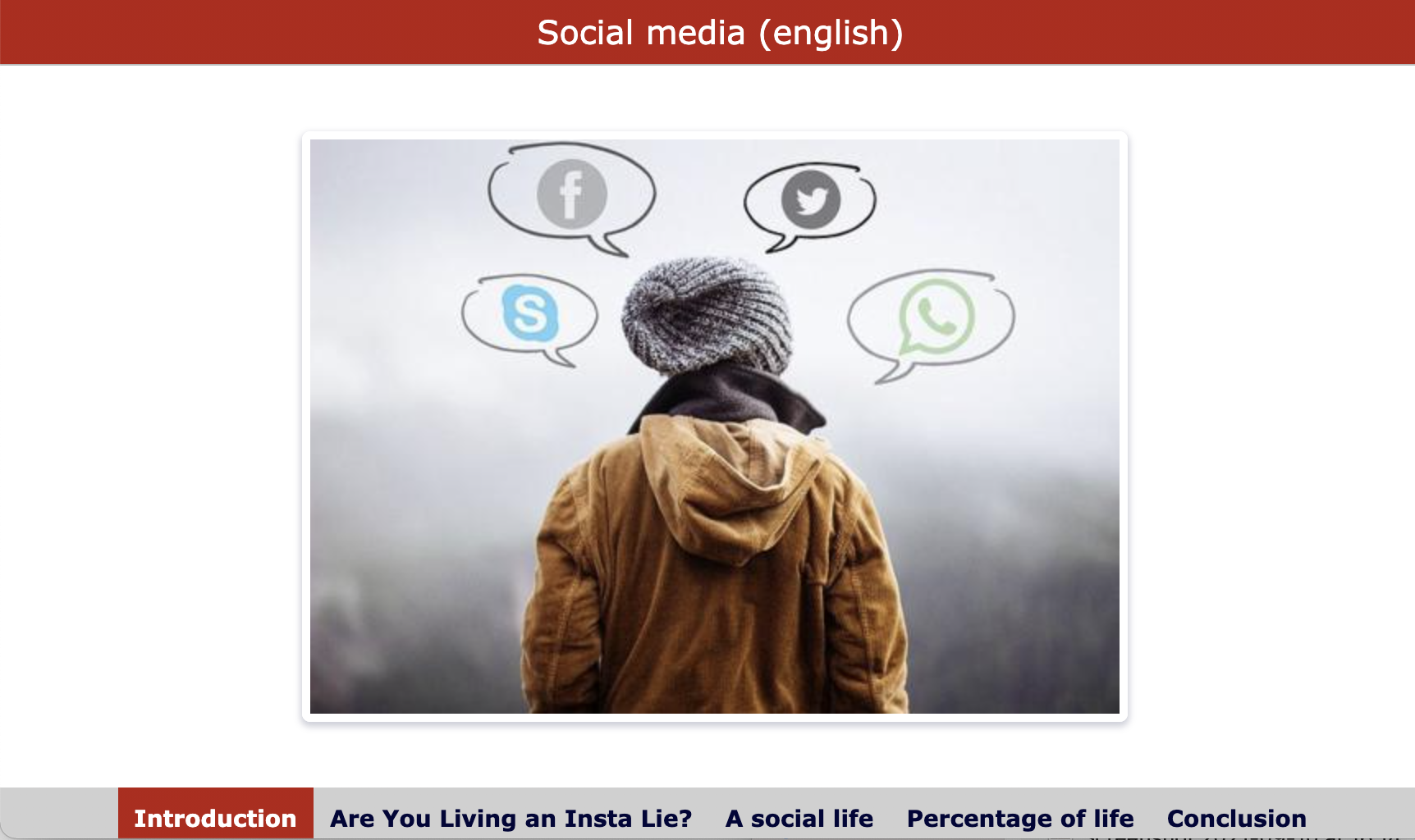 🍿 Synopsis: A boy is playing a video game when his mother gives him a present… a puppy! But the puppy is missing one leg and the boy doesn’t seem to be interested in it anymore. The puppy then starts playing by itself and it doesn’t take long before the boy gets infected by its joyful enthusiasm. When he decides to go outside with the puppy, it turns out the boy is also missing a leg.

👩‍🏫 Lesson idea: The main theme of the story is living with a handicap, but The Present could also be used to introduce topics like video games, pets, free time … Besides, you could ask your students to analyze the emotions of the different characters (the mother, the boy, and the dog). 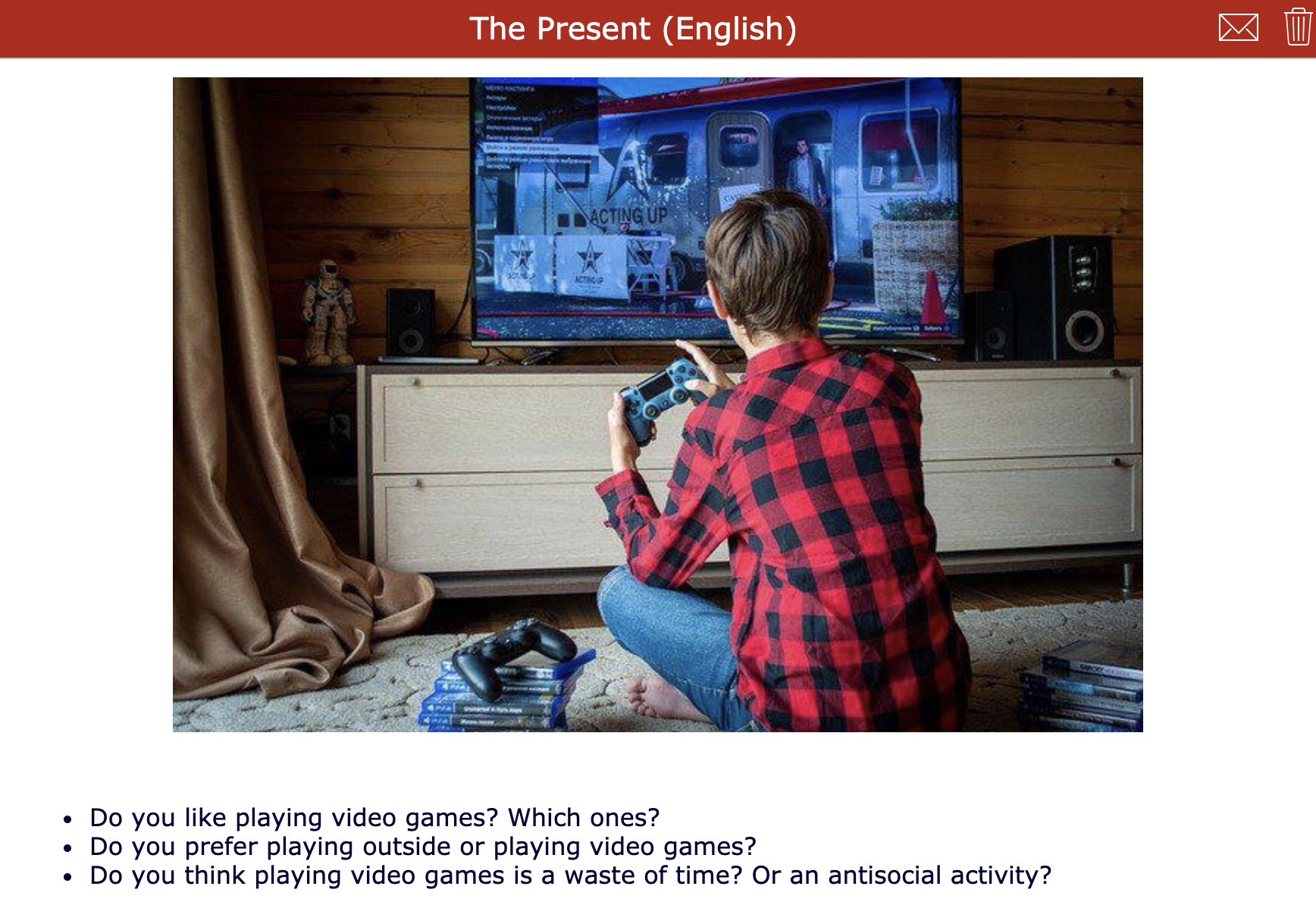 🍿 Synopsis: In the animated short film Versus, two samurai tribes (a red one and a blue one) try to conquer an island that lies right in the middle of their territory. They are very creative when it comes to finding new war techniques and even get inspired by different sport disciplines to beat the enemy. If you want to find out which tribe wins, you’ll have to watch the short film ‘till the very end (there’s a last plot twist after the closing credits).

👩‍🏫 Lesson idea: Versus is a great way to introduce the vocabulary related to sports in your language lessons, but could also be used to talk about the uselessness of war. 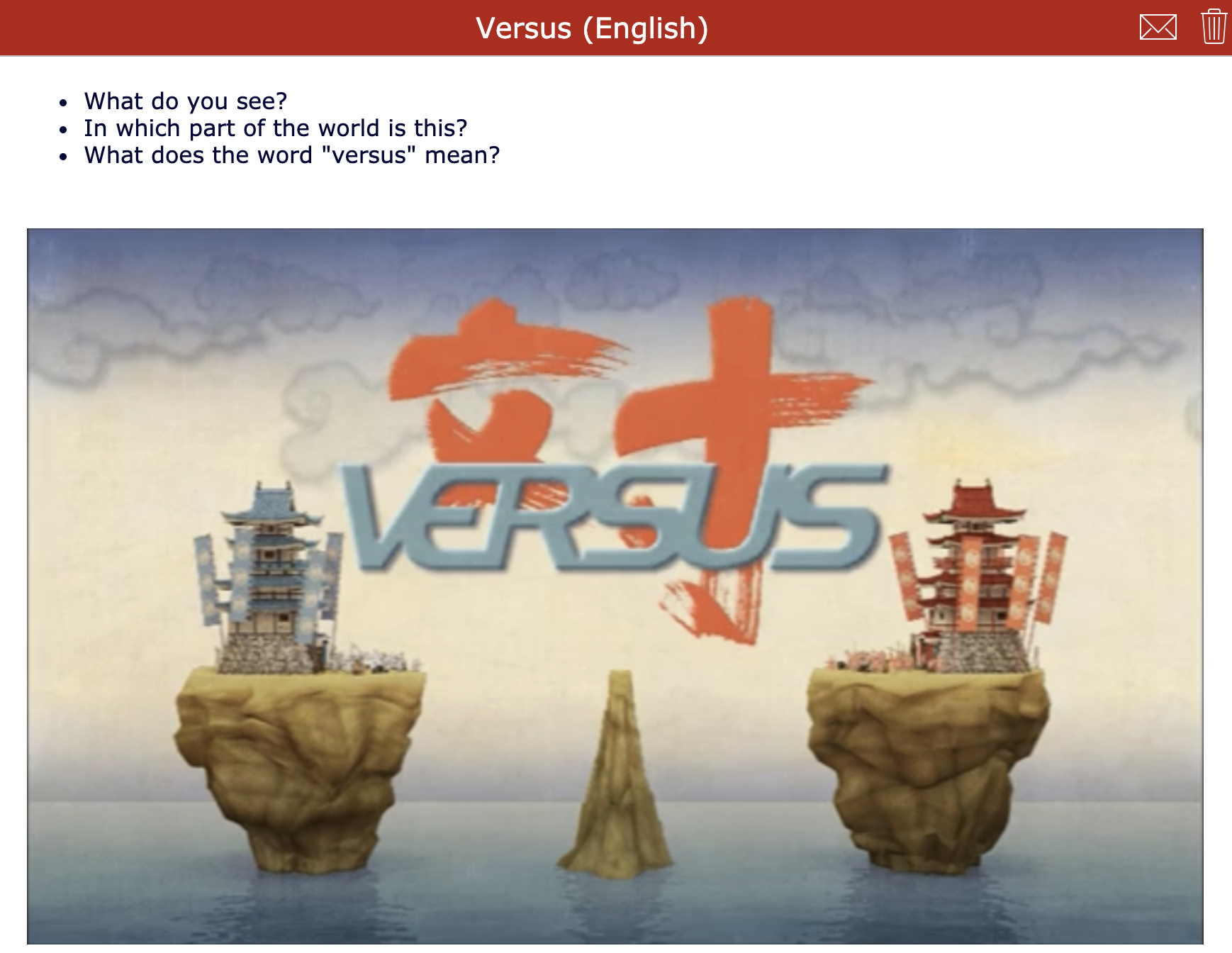 🍿 Synopsis: French is often considered as the language of love and these two short films are about very romantic love stories… but if you’re expecting a happy ending, you might get disappointed. If you like dark humor though, you’ll love both of them.

👩‍🏫 Lesson idea: Both short films are great for French teachers who like to work on listening comprehension. You could also work the different future tenses by pausing the video several times and ask the students what they’re expecting to happen next. 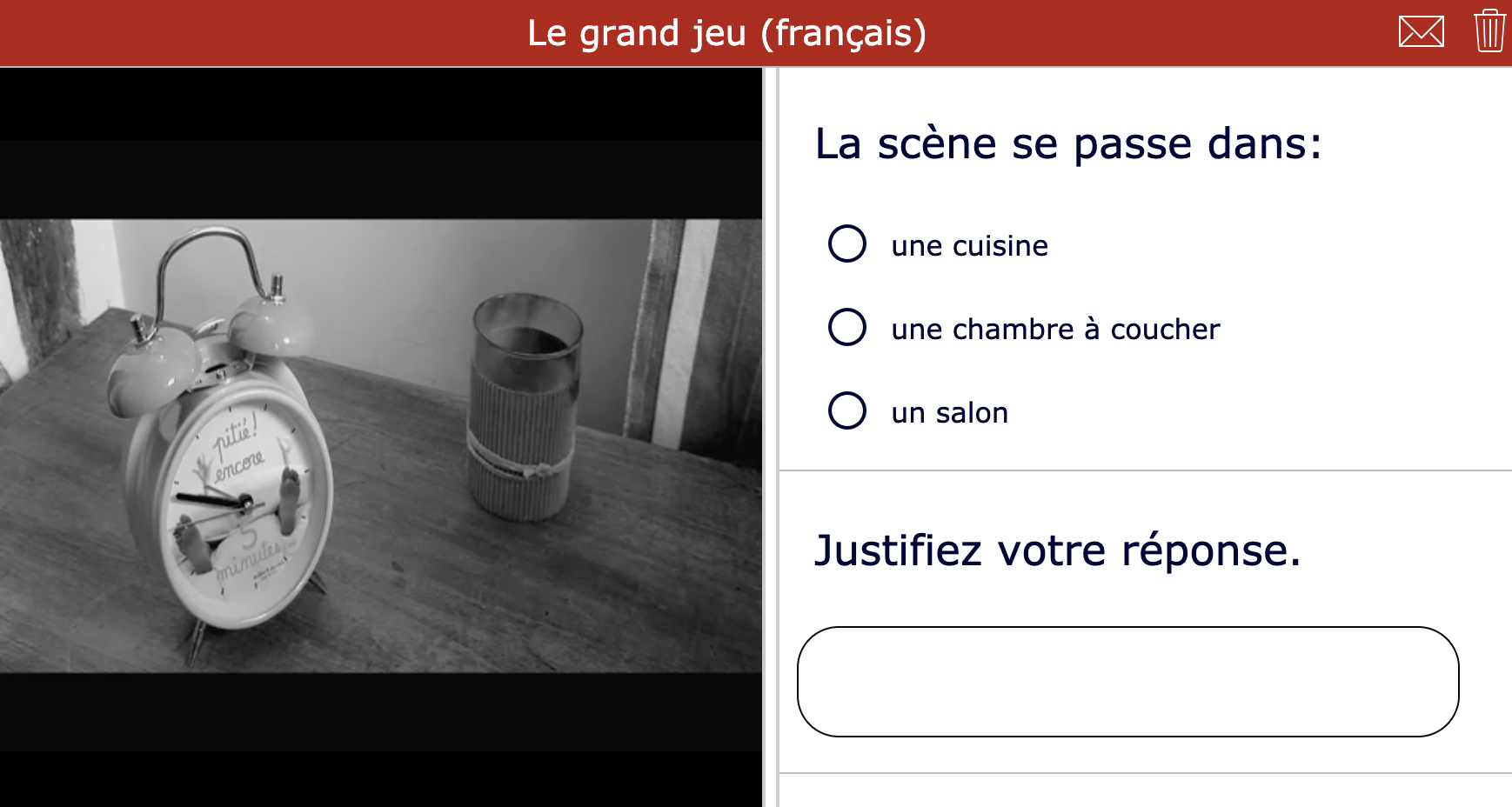 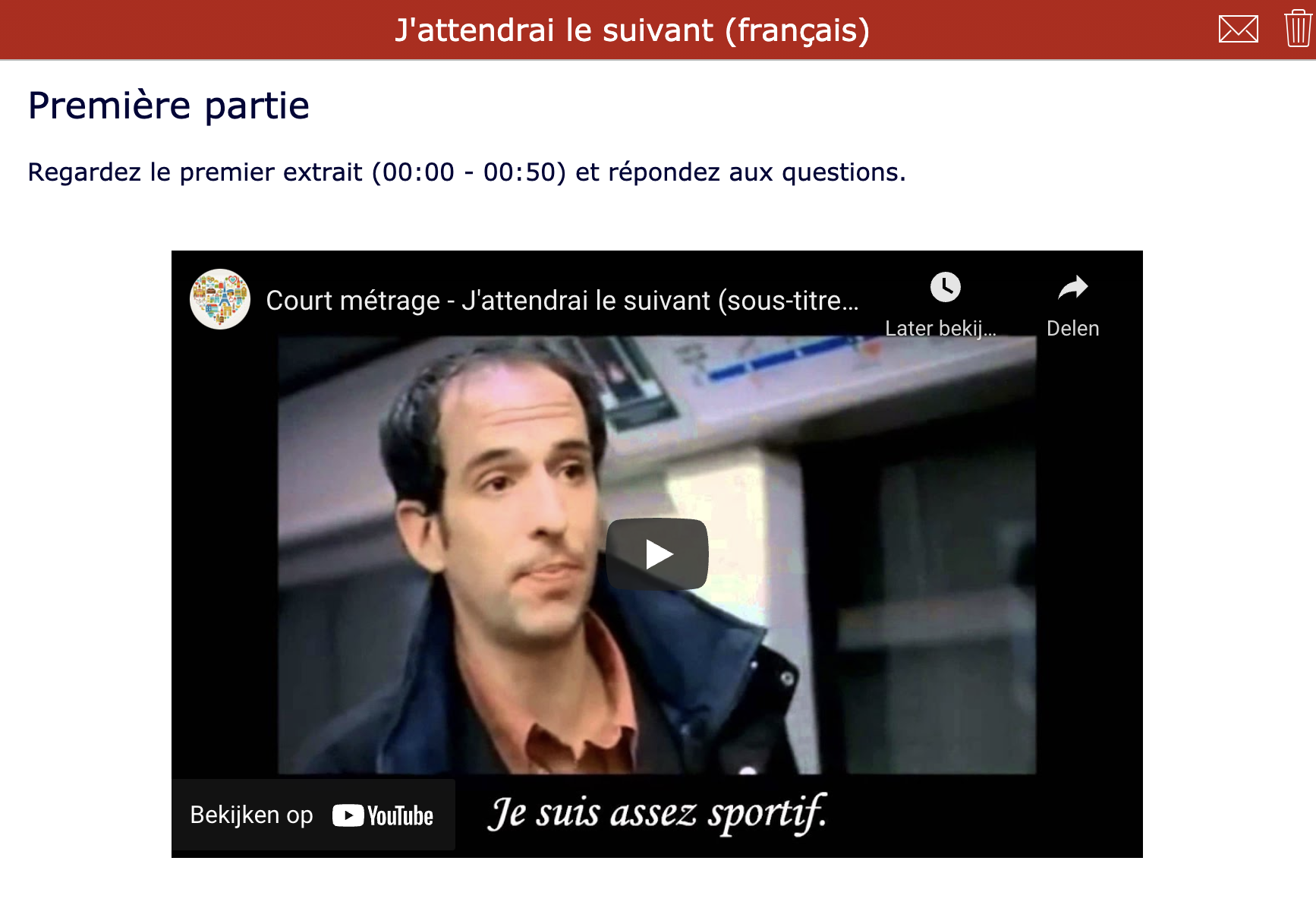 Instructions on how to use these digital short film lesson activities

Above, you can find the 10 ready-to-use short film lesson activities by clicking on the image. You can use these lesson examples for free. Since they’re all made with BookWidgets, I’ve listed them in this BookWidgets group, and most widgets are available in English, French, German, Spanish and Dutch. Here’s what you need to do:

Of course, now that you’ve got your own BookWidgets account, you can also create new short film activities or other assignments yourself!

Attention! Once your free trial runs out, you’ll only be able to use the widgets you’ve already finished/shared with students. While your BookWidgets account will still work and you’ll still get your students’ results with the free BookWidgets version, you won’t be able to duplicate widgets nor create new widgets yourself anymore.

Do you already use short films in class or are you planning to do so? I hope I gave you some new ideas that might inspire you. Which of these ideas is your favorite? Let us know on Twitter! - @ibookwidgets

Or share your own widgets about podcasts in our Teaching with BookWidgets Facebook group so that in turn, you can inspire others!

And most of all… enjoying watching! 🍿