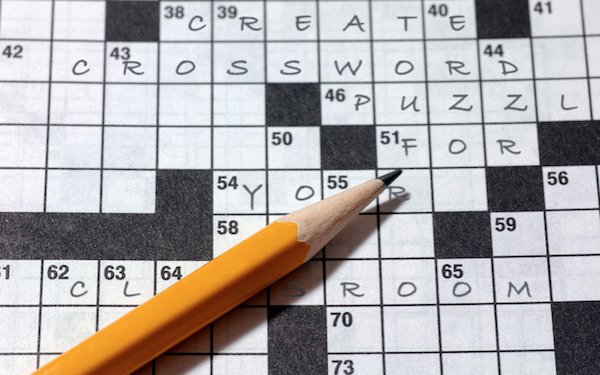 Create Crossword Puzzles for your Classroom

Whether you teach languages, sciences, math, or any other subject, using crosswords in your class is always entertaining. In this post, we’ll dive into some examples of crosswords you can use in the classroom, and we’ll show you how you can create your own crosswords for iPads, Chromebooks, PCs, or any other device.

Language classes are probably the most obvious place where crosswords can be useful and fun. By finding words based on clues, students can playfully learn new vocabulary in their native language or a foreign language. What’s more, by fitting the letters on the board, they also focus on the exact spelling of the words.

With a classical crossword, you can gives clues about words around a given topic in a certain language. For example, when teaching about the kitchen in English class, you could create a crossword like this one: 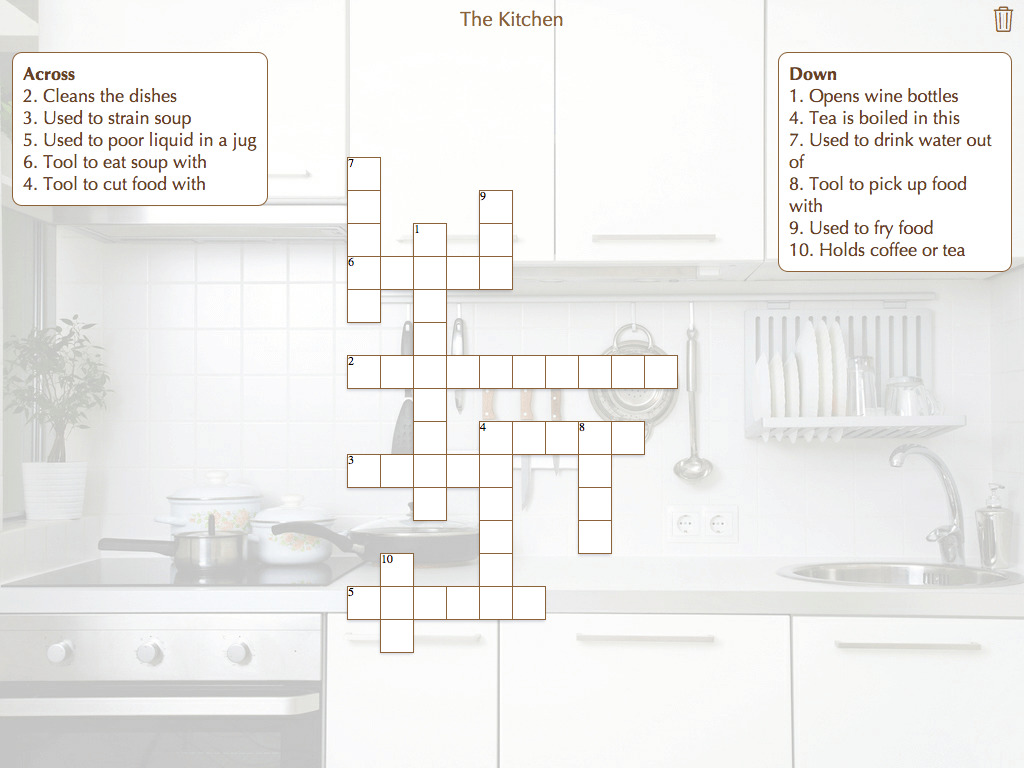 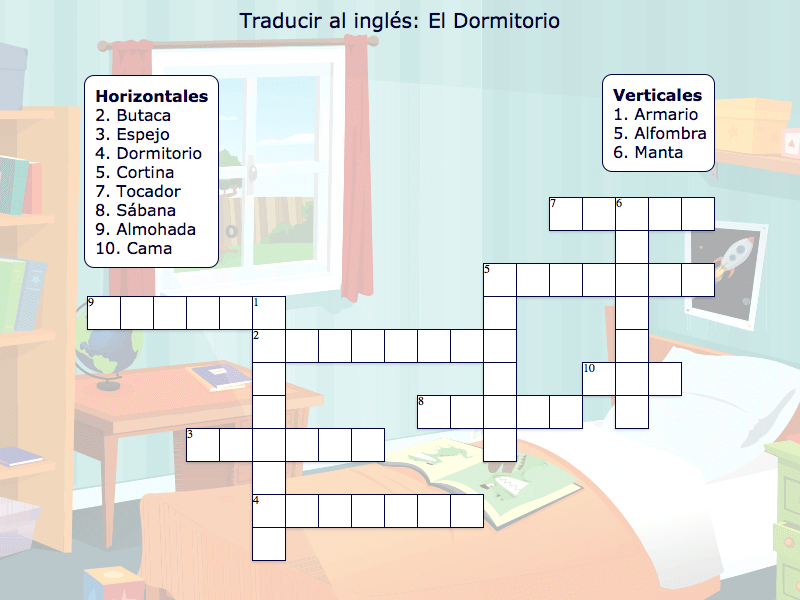 Using crosswords in your language classroom is almost too easy: pick any set of words around the subject you’re teaching, translate them or invent clues for them, use a tool to put them in a crossword, and you’re done! Want to get some practical tips on how to do this? Then just read on!

Chemistry, for example, is notorious for having a lot of stuff to commit to memory. One of the basics you have to learn are the elements of the periodic table. Why not put the symbols and their names in a crossword? 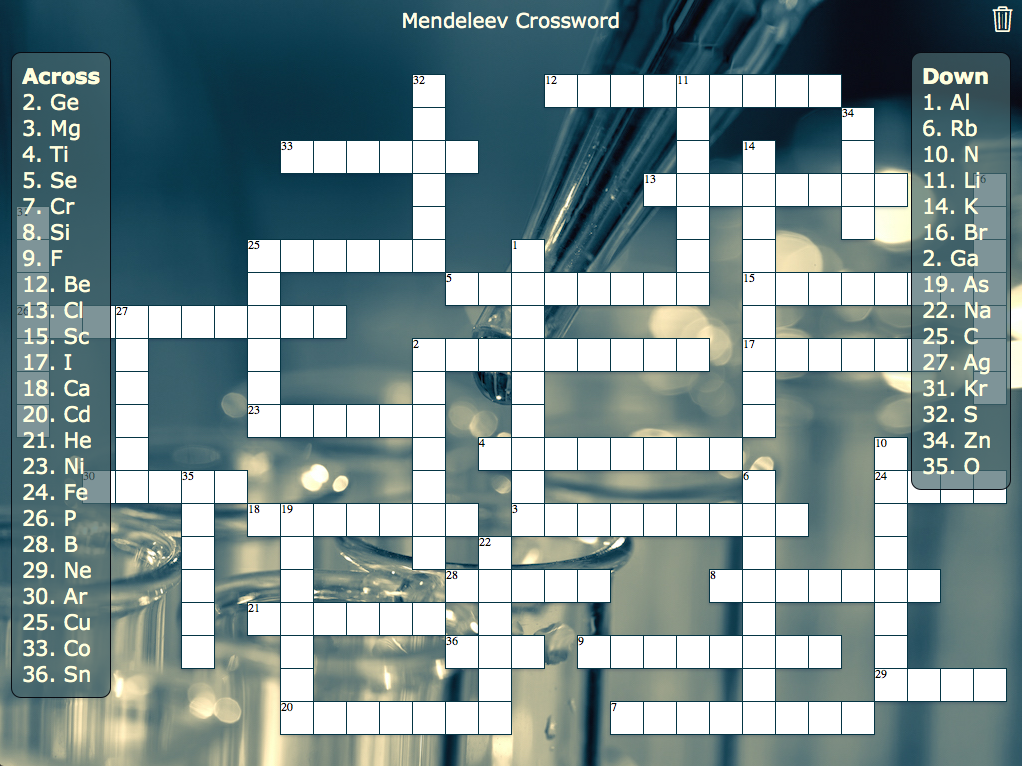 Geography also has its fair share of names to remember: countries, cities, continents, mountain regions, rivers, … Can you guess what I’m about to suggest? That’s right: “Why not create a crossword for it?!” For example, if your students need to learn about capital cities, make them guess it in a crossword: 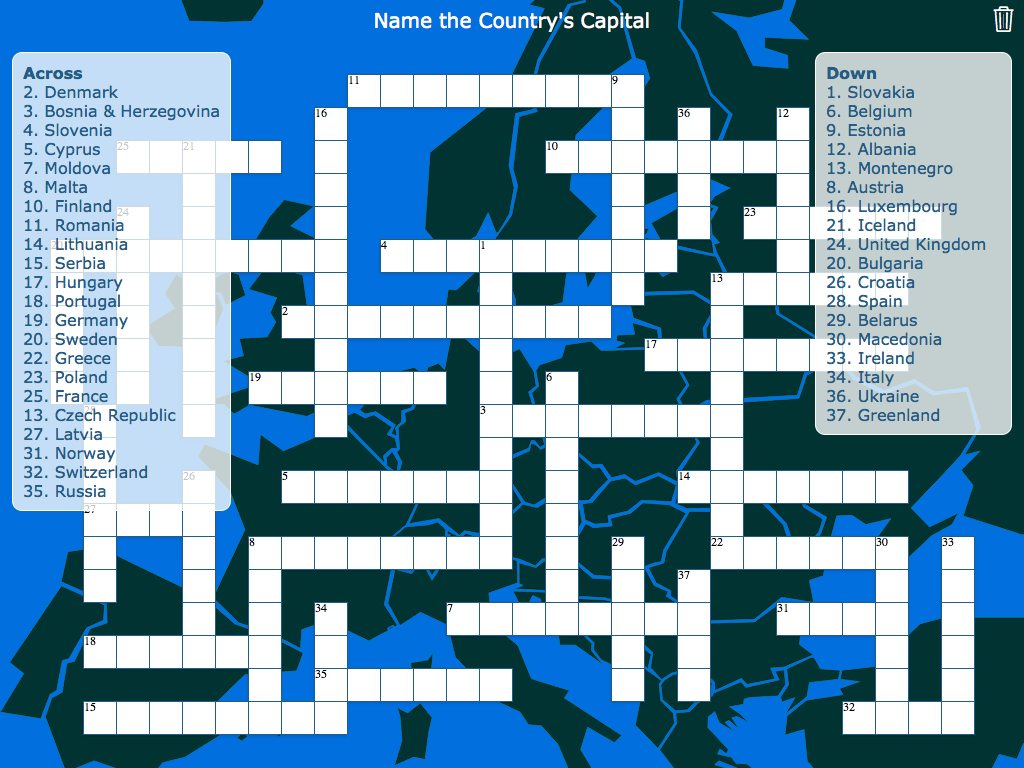 The list of suggestions for science crosswords is endless. I could go on and on, but I think I’ll end it here. Well, okay, just one more science topic for the road …

Like science, math also has specific terminology for which you can create crosswords. However, by playing with numbers, you can do some more out-of-the-ordinary crosswords as well. For example, you could create a list of arithmetic problems of a certain level, and let your students fill in the solution: 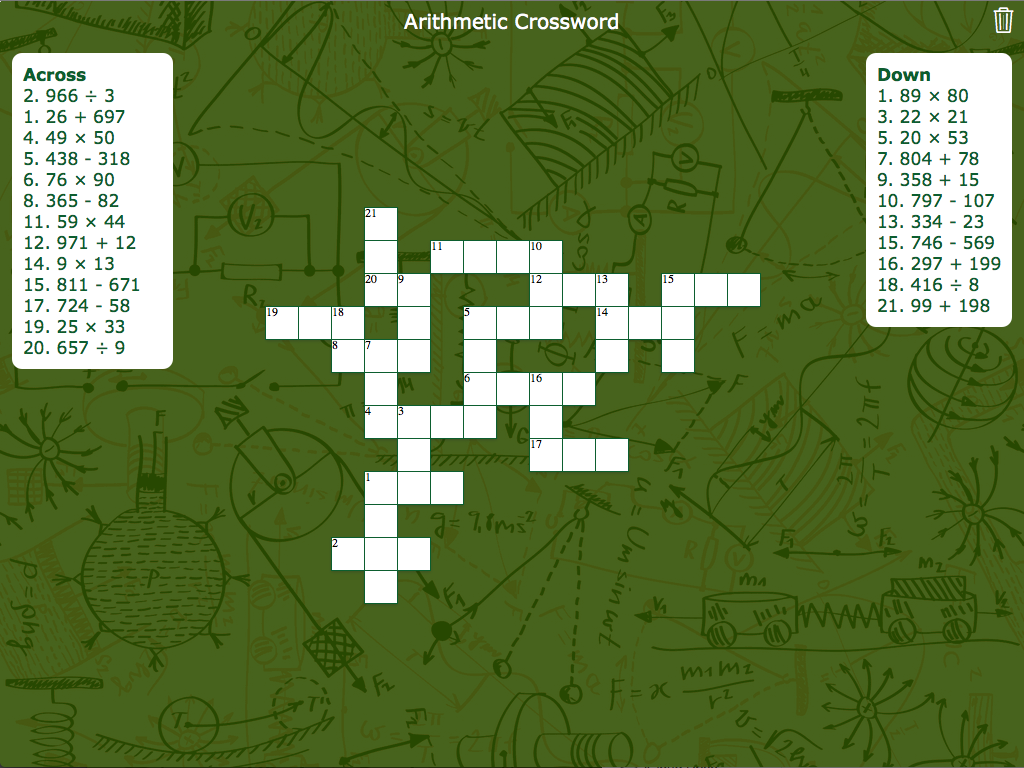 A crossword usually has sentences or other words as descriptions of words to fill in. Unfortunately, this makes crosswords challenging to play for our youngest students, who are only learning to read and write their first words. And yet, crosswords would be a great way for them to learn basic spelling.

If only there was some way to graphically describe simple words … 🤔

Hang on, there is: Emoji! 🙌🚀🎉 Many simple words (such as the ones from the Dolch word list) have an emoji symbol. By using emoji as clues, you can quickly create a crossword that is easy enough to play for the smaller ones: 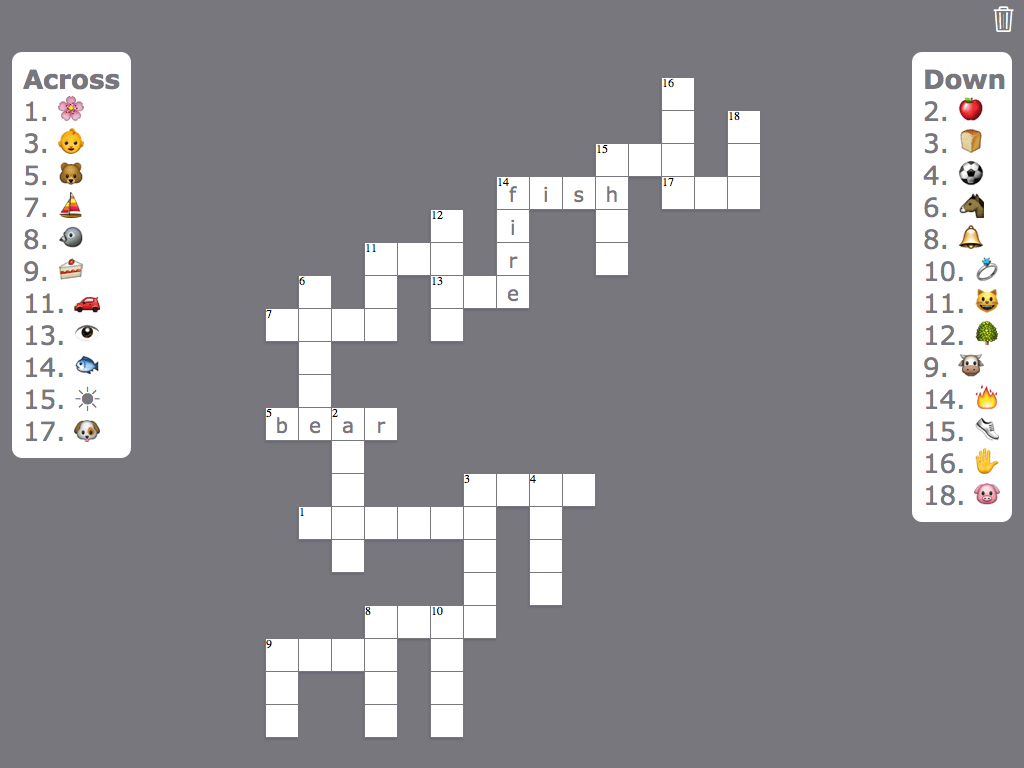 If you’re a real artistic talent, and are willing to put in some extra time and effort, you can even draw your own clues: 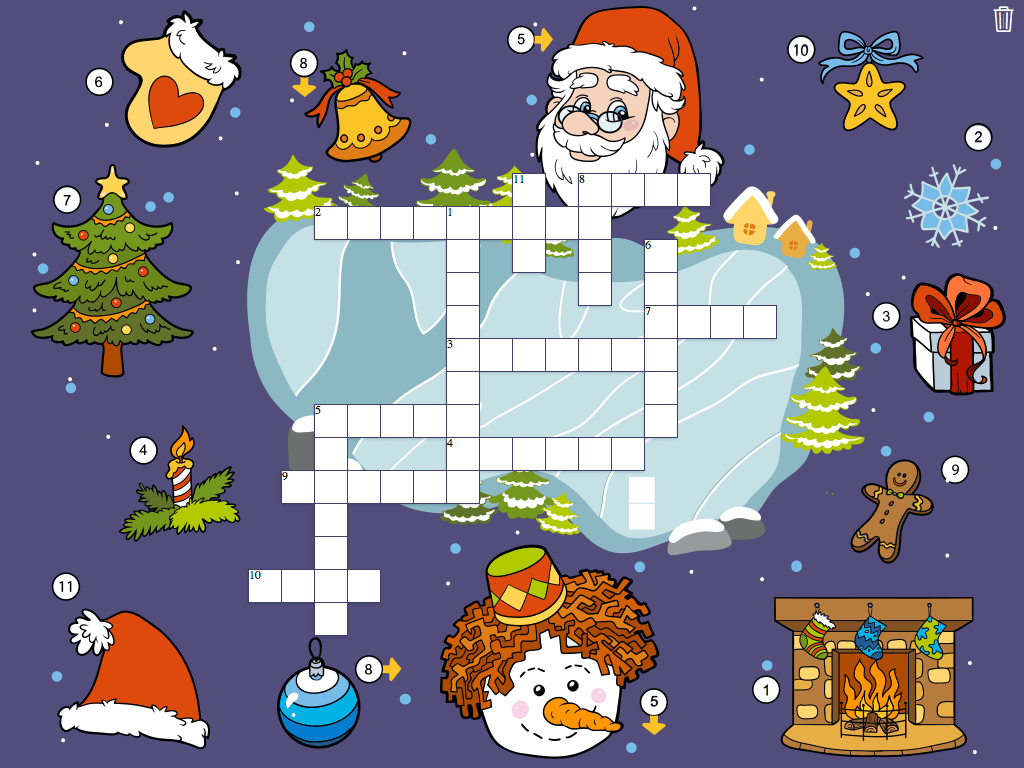 So far, the crosswords we’ve shown are relatively easy if you know your material: each clue typically maps only to a few possibilities, and especially if you already have a few letters, the answer is pretty obvious. However, you can spice things up by making the clues ambiguous, such that there are many possibilities. The only way to know what to fill in is to either know a few letters, or to apply logical reasoning skills to eliminate possibilities.

For example, suppose you’re teaching counting in Spanish. Instead of giving the English numbers as clues, you could simply not give any clues at all: 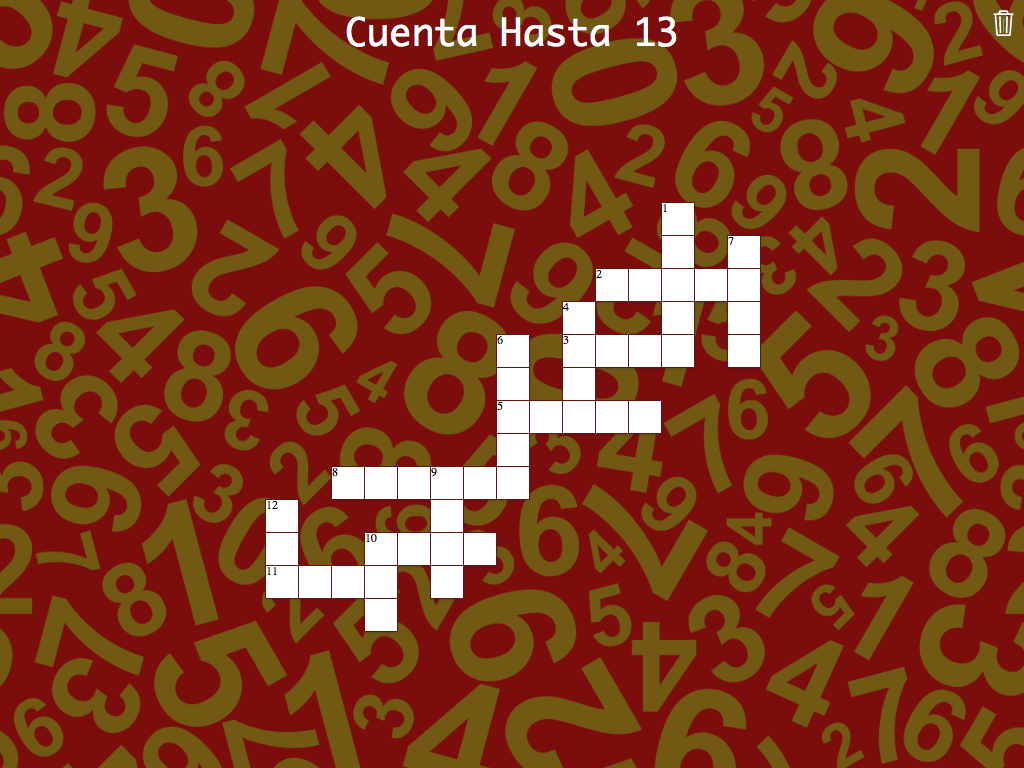 In the above example, 12 down could be either uno or dos, which would make 11 either ocho or seis; you need to continue trying in order to eliminate the possibilities. However, a smart student would figure out that they’re better off starting with the only 6-letter word, cuatro, and continue from there. These puzzles keep them excited by making their logical deduction skills work, and they’re learning their numbers while playing Sherlock Holmes! 🕵️

We have talked about using ice breakers in the classroom to make students acquainted with each other on the first day of school. Besides games such as Bingo or Hangman, crosswords also be a fun way for students to get to know each other’s names. You could use descriptions of the student as clues, and let them fill in the first names; or, you could list the first names, and leave the last names to be fitted in the crossword: 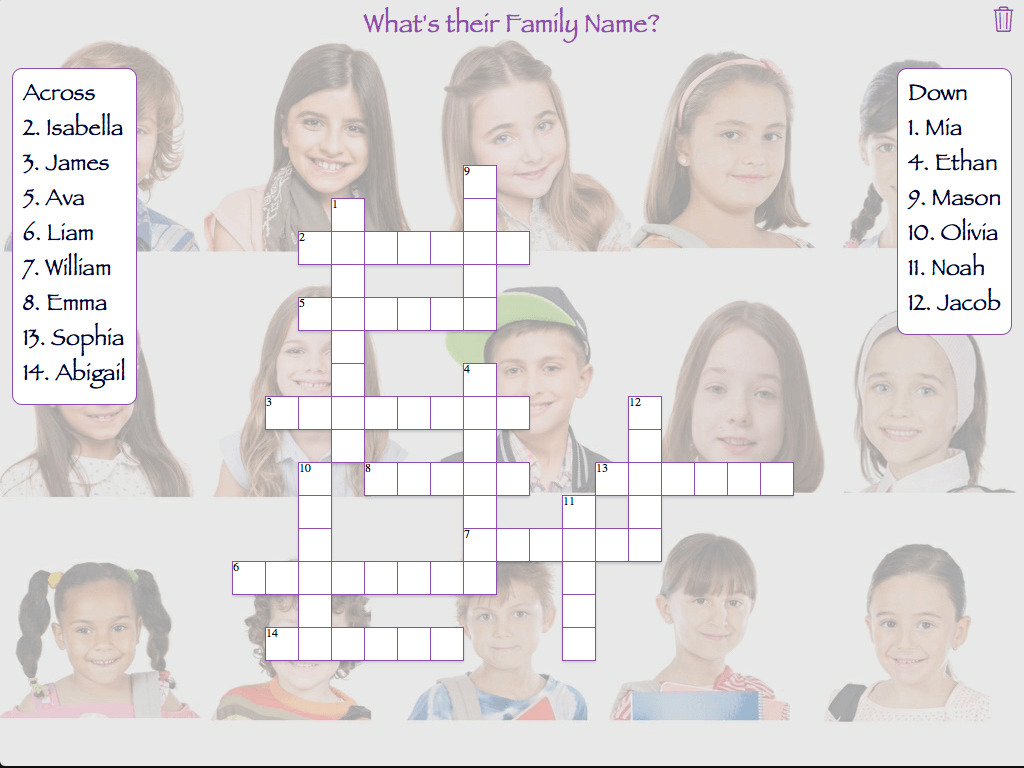 You can find lots of crossword-friendly variations on the ice-breaker theme to take the edge of that first day.

Creating your own Crossword Puzzles

By now, you may be thinking “This all sounds great, Remko, but I want to create my own crossword for my own lessons. How do I go about that?” Well, BookWidgets has you covered, and makes it very quick and simple to create your own crosswords. All you have to do is enter some words and their clues, and BookWidgets takes care of fitting the words together into a nice looking interactive crossword. You can instantly send to your students' iPads, Chromebooks, or PCs. You can even let students submit their filled in crosswords to you, and BookWidgets will automatically grade their crossword. Don’t have devices in your classroom, or do you like to play it old-school? Then you can just print BookWidgets' crosswords straight from your browser.

To find out more about creating your own crosswords with BookWidgets, just have a look at this simple step-by-step tutorial:

Ready to give it a shot? Just hit the button below, sign up, and start creating crosswords (and many other widget types) with a free BookWidgets trial.