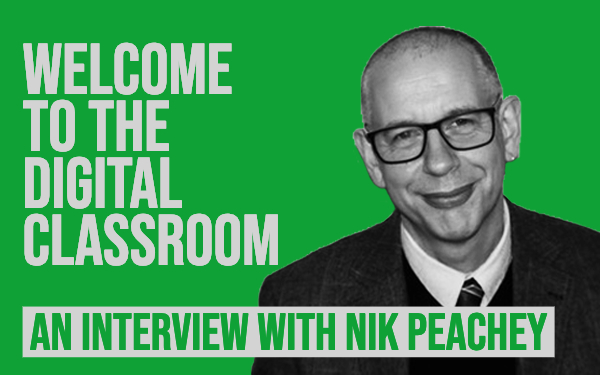 Welcome to the digital classroom - An interview with Nik Peachey

Specialist in learning technology, a writer, a former language teacher, a teacher trainer, and a course designer. Nik inspires teachers with his Scoop feeds and newsletters about educational technology, and writes award-winning materials for the digital classroom.

I wanted to know how Nik found his way back to education, and how he sees the future of education. Read on, and find out! I’m sure you will find Nik’s words very inspiring.

The difference is education

Nik Peachey: “After a few years in dead-end jobs doing manual labor, I realized that the only way out that kind of work was to get a better education. I started going to evening classes and learning about music and music theory, and eventually got a place at a college to do a music degree studying jazz guitar.”

Not long after going to college for his music degree, Nik eventually became a language teacher. Studying music (particularly jazz) was a great route into language teaching.

Nik Peachey: “Jazz works in very much the same way as language - you learn structures and you use them to improvise meaning spontaneously within different contexts. Like language, creating music is also a mixture of knowledge and skill. The knowledge though has to become almost instinctive for you to become fluent.” 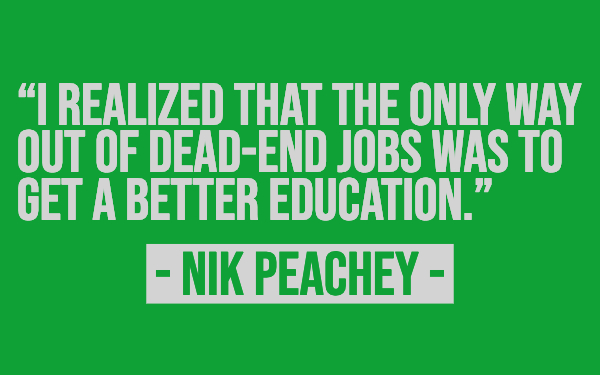 Nik also got a part-time job teaching guitar to prisoners in a local prison. Another considerable influencer on him taking an interest in education.

Nik Peachey: “As I worked with groups of prisoners, I pretty soon realized that these men weren’t very different from myself, and how easily I could have ended up in the same place. The thing that made a difference was education and having people who care about you.”

Teacher and student of the future

As Nik has come a long way already, I really want to know his point of view on this: “What skills are essential for the teacher of the future?”

Nik states that it’s important to think and learn for yourself. An important lesson he continues to teach his students and teachers during his trainings.

And there’s more from where that came from:

Nik Peachey: “I think the ability to empathize and the ability to develop what is most human in people is also an important skill. Show students that you care about them. Many of the things we do as teachers can be put online or can eventually be done by robots, but will students ever really believe that a robot cares whether they make progress or not?”

Humanity: that’s something no-one can ever take from teachers. So, does this count for students as well? What skills are essential for a student in the future?

The way teachers teach in the future will definitely change. So, this means students will need other skills to cope with this. Nik states that the ability to work collaboratively online through various virtual mediums will become more important every year. Students must be prepared for the digital age, an age that’s already here for a while, but is only beginning to play its part in education. 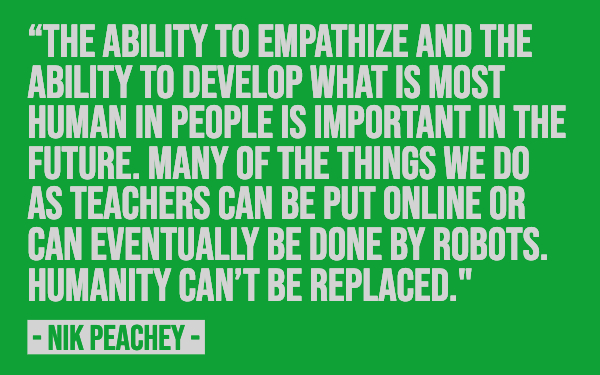 The digital classroom - Opportunities and pitfalls

As you know by know, Nik wrote some great ebooks about the digital classroom. He started writing materials for his students because he saw that the materials in his coursebook weren’t a particularly good fit for them, or that they weren’t interested in the topics. Just like in education (if you capture your students' interest, they will learn better), Nik enjoyed creating and designing the materials and wanted to do more.

His books are a mixture of things he liked doing with his students when he was teaching, such as the image-based lesson plans, and things that he felt were needed and not being covered by the existing publishers, such as digital literacies.

Nik Peachey: “I did an M.Ed in Educational Technology at Manchester University back in 1999. I wanted to do a masters and just decided to pick something that sounded interesting and that I didn’t know much about. Then I got hooked. My first daughter was born in Barcelona that year and, as she grew up, I started using web resources and computer games to keep her in touch with her first language culture.”

Giving people the opportunity to find things out for themselves and develop themselves is, according to Nik, the real power of using educational technology in education. The future really does belong to the autonomous learner.

Some parts of some education systems are ready for this kind of “digital classroom”, and some are not. Nik works all over the world on various projects, and of course, he notices huge variation.

Nik Peachey: “In many cases though it’s the technical infrastructure that is lacking rather than the will and readiness of teachers. Many schools just don’t supply a sufficiently robust internet connection and so they set teachers up to fail.” 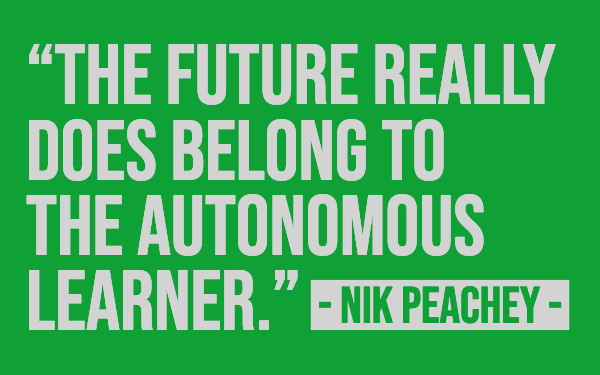 Besides the right infrastructure, you need some tools to help you set up a digital classroom. Nik has some great tips:

Using technology in education has its benefits. According to Nik, giving access to information and content to those who haven’t had it before is one of those benefits. Also add “developing students learner autonomy and the ability to discover for themselves” to that list. Another important benefit of using technology in education is the ability to create engaging and situated learning that is student-driven.

Of course, everything has another side as well.

Nik Peachey: “Only focusing on the hardware, for example. Schools that buy iPads/IWBs or tablets, and think that learning will be magically more effective, is one of the greatest pitfalls of using technology in education.

Other pitfalls are: not training teachers how to use technology, and not providing a sufficiently robust internet connection to enable teachers to succeed when they use technology. 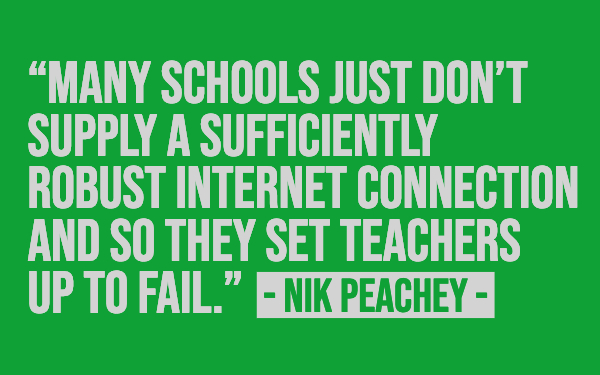 To end this interiew, I have one last question. But this one’s not for Nik, it’s one for you: Are you ready for the future? Are you ready to teach in a digital classroom?

Now, is your school?